Amid swirling reports that marijuana banking provisions may be excluded from a yet-to-be-filed omnibus spending bill, some lawmakers are pushing back, while advocacy groups and industry stakeholders are stepping up their calls for action in what’s left of Congress’s lame duck session.

To be clear, the text of the final appropriations package has not been released and negotiations are ongoing. But it was reported on Tuesday that appropriators have reached an agreement on a “framework” for the legislation. What’s troubling for supporters, however, is a brief post from a Punchbowl News reporter saying that the Secure and Fair Enforcement (SAFE) Banking “will not be included” in the package.

This comes on the heels of comments from the GOP Senate whip who said he’s not expecting the cannabis proposal to be attached to the spending bill, either. And Senate Minority Leader Mitch McConnell (R-KY), who applauded the exclusion of SAFE Banking from a must-pass defense bill last week, has repeatedly signaled that he’d fight against attempts to advance it through appropriations as well.

In his latest comments on the spending package on Wednesday, McConnell said that “poison pills…will need to stay away from the process.”

“Even then, the calendar will still make this a challenging sprint,” the minority leader said. “If a truly bipartisan full-year bill without poison pills is ready for Senate passage by late next week, then I’ll support it… Otherwise, we’ll be passing a short-term continuing resolution into the new year.”

A continuing resolution that’s currently advancing in the House would keep the government funded through December 23. The deadline under current law is this Friday.

McConnell has previously referred to marijuana banking as a “poison pill” in the context of other large-scale legislation, but he didn’t explicitly reference the reform in these latest remarks. Still, it’s not an especially encouraging position for advocates who view appropriations as one of the last remaining vehicles for SAFE Banking or a broader SAFE Plus package that could include expungements and other cannabis provisions, short of moving it as a standalone before Congress adjourns for the session.

All of that is to say that there’s a fair amount of pessimism as the clock ticks down. But not everyone shares that sentiment, including SAFE Banking sponsor Rep. Ed Perlmutter (D-CO), who has made abundantly clear that he’s unwilling to give up the push and will continue to seek the bill’s passage before his retirement at the end of the 117th Congress.

A staffer in Perlmutter’s office told Marijuana Moment on Wednesday that while there’s uncertainty about advancing cannabis banking reform through the omnibus spending bill, the congressman “is still pushing as hard as he can and talking to leadership.”

Perlmutter said at a House Rules Committee meeting on Tuesday that SAFE Banking is one of two “outstanding matters that I’m still working on.” After the reform was left out of the National Defense Authorization Act (NDAA) last week, he said he was looking at appropriations as an alternative vehicle, but at this point he said he’s just intent on adding it to “something.”

With each day that passes in the lame duck, there’s growing frustration and anxiety among advocates and stakeholders, some of whom feel that this may be the last chance in the short-term to get marijuana banking enacted before Republicans reclaim the majority in the House starting on January 3.

For his part, Sen. Cory Booker (D-NJ) has pinned blame on McConnell, telling NJ.com that his vocal opposition to cannabis reform has had a chilling effect of GOP members who might otherwise be amenable to passing legislation that contains SAFE Banking language.

“They’re dead set on anything in marijuana,” he said, referring to Republican leadership. “That to me is the obstacle.”

“The caucus is clearly divided but the people in power in their caucus are clearly against doing anything on marijuana,” he added.

While McConnell’s influence on the issue during the lame duck seems apparent, however, many industry stakeholders feel that Senate Majority Leader Chuck Schumer (D-NY) shares at least some of the blame, arguing that it’s incumbent on him to leverage the Democratic majority and force floor consideration of the incremental reform.

It’s the least he could do, they say, given his earlier promises to bring comprehensive legalization to the floor.

September 2020: “My commitment is that, if I am leader, I am going to do everything I can to put the Marijuana Freedom and Opportunity Act [his earlier legalization bill] on the floor of the Senate,” Schumer, as then-minority leader, said. “The odds are very high it will pass.”

October 2020: “If I become majority leader, I put this on the floor and it’s likely to pass.”

December 2020: “If I become majority leader, I put it on the floor, and my guess…it’ll pass. It’ll get Democratic and Republican votes.”

April 2021: “I am going to put this bill on the floor soon,” Schumer said, at the time referring to his yet-to-be-filed CAOA.

But even before he, Booker and Senate Finance Committee Chairman Ron Wyden (D-OR) filed their much-anticipated legalization bill—the Cannabis Administration and Opportunity Act (CAOA)—in July, it became clear that they did not have the 60 votes needed to clear the Senate and hopes of ending prohibition this Congress were dashed.

Whether it was wishful thinking, strategy or something in-between, those promises did not ultimately materialize.

Of course, political dynamics shift—and the steep 60-vote threshold for Senate passage was likely a key part of the calculus in not following through on that commitment—but now many advocates are left wondering why he doesn’t at least take this lame duck opportunity to use his power to bring SAFE Banking or SAFE Plus to the floor, where it’d presumably enjoy modest bipartisan support, before entering into a divided Congress next year.

It’s not as if everyone has accepted the idea that a Democratic Senate and GOP House means that incremental reform is dead on arrival in the 118th Congress. There are some who even believe that House Republicans may take the chance to seize the issue from Democrats with their new majority—which is certainly the hope of pro-legalization Rep. Nancy Mace (R-SC).

The congresswoman said in a since-deleted tweet on Wednesday that “SAFE Banking is a good bill and it’s a shame all the misinformation about how its passage was imminent. As we close on the end of the legislative session we must look ahead and look beyond SAFE next Congress.” 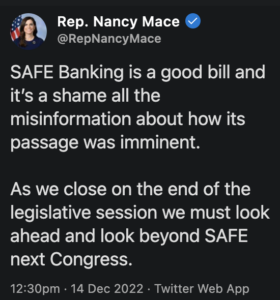 The post picked up some attention from advocates and stakeholders before being deleted, but a staffer told Marijuana Moment that the congresswoman plans to expand on her thinking in a Twitter thread on Thursday.

As supporters wait to see what actually makes it into the omnibus appropriations legislation, which is now expected to be released in the coming days, there’s been a concerted push from a wide range of interests to pressure lawmakers to get the job done.

One campaign from the Marijuana Policy Project (MPP) picked up particular steam on Wednesday, with major corporate players and celebrities sharing the organization’s call-to-action on SAFE Banking.

Join us in calling your congressional leaders – ask them to put SAFE to a vote! #SAFEnow

Cannabis supporters – now’s the time for your voice to be heard: https://t.co/Pxl4UkA7Pw $CURA $CURLF pic.twitter.com/jEmQSiyjog

Cannabis supporters – now is the time for your voice to be heard: https://t.co/cvaj0MAqGP pic.twitter.com/bkTQJFk8HK

The people have spoken in support of cannabis reform! Let’s take SAFE to a vote! Please share – we need #SAFEnow!!!

Cannabis supporters – now’s the time for your voice to be heard: https://t.co/cUxsLeCG3n pic.twitter.com/y9Z9IKoiAw

Professional wrestler Ric Flair, who has his own line of cannabis products:

The man has spoken! The people have spoken! We want cannabis reform NOW! WOOOOO!!@SenSchumer let’s get this done!

Time to SAFE bank!!! Learn more about the SAFE act so we can keep making progress towards cannabis reform🍃🍃🍃 https://t.co/VtZVTdOxwp

Industry players have long been unified around the idea of passing SAFE Banking, and doing so urgently, but the coordinated push this past week has underscored just how high they view the stakes in these final weeks of the lame duck.

Financial organizations including the National Association of Federally-Insured Credit Unions (NAFICU) and Independent Community Bankers of America (ICBA) have also been amplifying their message to lawmakers to get the job done sooner than later.

Meanwhile, Senate Banking Committee Chairman Sherrod Brown (D-OH) said in an interview with Nexstar that aired on Monday that he sees a path forward.

“It absolutely could still happen,” Brown said. He added that lawmakers are “this close to a deal,” placing his thumb and index fingers about an inch apart.

Last week, SAFE Banking sponsor Sen. Jeff Merkley (D-OR) said that he will “keep fighting” to get the reform “passed this year,” adding that “this is not the end of the road.”

“We need to make sure that legal cannabis businesses have access to the financial services they need—operating in cash is an open door to robbery and money laundering,” he said. That’s also a point highlighted in a recent analysis that looked at the trends and motivations for crimes targeting cannabis businesses in Washington State.

One senator who could make or break the final SAFE deal in appropriations is Sen. Pat Toomey (R-PA), who was among a small group of senators who met with the Justice Department this week to seek assurances that issues it raised over SAFE Banking in a memo earlier this year have been effectively resolved.

Meanwhile, Sen. Patty Murray (D-WA), who will serve as Senate president pro tempore for the 118th Congress, is also pushing for passage of the cannabis banking reform during the lame duck, which she discussed at a leadership briefing with Schumer last week.

Murray said that Democrats have made significant progress on a number of issues, even with the slimmest possible majority in the Senate. She said that “we are not done yet,” and there are areas of bipartisan consensus that can still advance before the end of the session, which includes “making sure our legal cannabis businesses can access credit.”

Whether SAFE or SAFE Plus makes it into the forthcoming appropriations deal is yet to be seen. But it’s far from the only cannabis reform that advocates are hoping to see included in the final package delivered to the president’s desk.

The various appropriations bills that the House and Senate considered or advanced this year contain provisions ranging from protecting state marijuana programs from federal interference to removing the congressional blockade that’s prevented Washington, D.C. to implement a system of regulated cannabis sales for adults.